The Acorn Blaster, or Acorn Launcher, is the second ranged weapon that The Hero obtains in Drawn to Life. After the Snow Gate, Isaac will upgrade the player's Snowshooter to fire acorns instead of snowballs, but first has The Creator redraw it from the Acorn Blaster Template. It is used exclusively in the Forest Gate.

While similar to the Snowshooter, the Acorn Blaster operates on different projectile mechanics. Instead of having a single snowball that travels in a straight line, the Acorn Blaster instead lobs a single, large, arcing acorn into the air. This acorn then bounces erratically for a few seconds on a set timer before splitting into three smaller acorns. Each of the smaller acorns is able to deal damage, but do not bounce, and instead explode on contact with any object.

The large acorn deals one

of damage, while each of the smaller ones are also capable of dealing one

of damage on their own. This can lead to a potential of

of damage, although this is very unlikely.

As the name suggests, the Acorn Blaster uses acorns as ammunition. These can be found scattered across the Forest Gate maps in inconspicuous piles of brown leaves, which the player must Ground Bounce to obtain the ammo. A small pile of will grant 5 acorns worth of ammo, while a large pile will restore 10. The player starts levels off with 30 acorns.

Due to the Acorn Blaster being a creation object and having no pre-drawn preset or guide, the appearance of this object is completely dependent on the player.

They are, however, still confined to a preset, vaguely gun-shaped area. 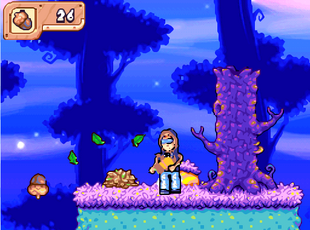 A hero firing their acorn blaster near an Acorn Pile. 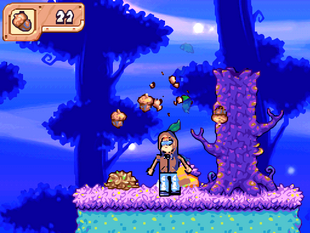 An Acorn projectile exploding shortly after being fired.
Add a photo to this gallery
Retrieved from "https://drawntolife.fandom.com/wiki/Acorn_Blaster?oldid=57383"
Community content is available under CC-BY-SA unless otherwise noted.