Drawn to Life Wiki
Register
Don't have an account?
Sign In
Advertisement
in: Featured Articles, Bosses, Shadow,
and 8 more

Not to be confused with the Anglerfish.

“I am the Angler King! You DARE invade my realm!?”

The Angler King is the third boss fought in Drawn to Life, and is the boss of the Beach Gate. He is an enormous anglerfish supposedly corrupted by Wilfre. The Raposa he guards is Count Choco.

The Angler King is awoken shortly after the creation of the Lighthouse. As soon as Pirate Beard's ship is guided to the Village Docks by the newly-created Lighthouse, the ground in the Raposa Village begins to tremor. Pirate Beard, immediately recognizing the cause of the tremor, informs the The Hero as to the boss's location. After a short bit of dialog from Wilfre, The Hero enters the Beach Gate and begins the fight against Angler King.

This boss battle is composed of two "phases" in which the player must navigate through in order to defeat the Angler King and save Count Choco. The Angler King has twenty Health and can only be damaged by projectiles from the Starzooka.

The Angler King, as his name implies, is a huge, orange, deep-sea anglerfish, complete with a large upturned mouth, long fangs, and a glowing lure. There is also a large blue Anemone mounted on his back that oozes Shadow Goo; Shadow Goo also seeps from around his pure white eyes.

At first, The Hero must swim away from the Angler King as he chases them through an long underwater tunnel system, and shoot him with the Starzooka occasionally to halt his movement and hold him back. Every once and a while, the Angler King will speed up significantly and attempt to bite the Hero. This is similar to the first part of the battle with Frostwind.

Next, they will come to a large opening in the cavern where Count Choco is held. Here, the main battle will commence, and the Angler King will use a variety of attacks in an attempt to dispatch the Hero. These include spawning 3 Shadow Fish to chase the them, charging quickly from one end of the screen to another, a trail of bubbles indicating where, and even attempting to swim around and bite the Hero himself. During this time, Count Choco will aid the player by dropping health and ammo for them should they need it.

Once defeated, the Angler King will turn a vivid shade of red, shake violently, and then go "belly up", floating to surface just beneath Count Choco, allowing him to fall and break the cage, releasing him. 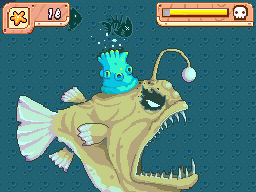 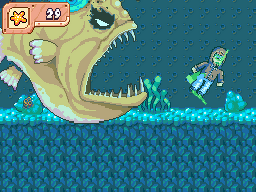 The Angler King chasing a hero. 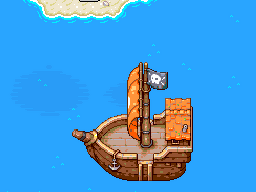 The Angler King as seen from the Village Docks. 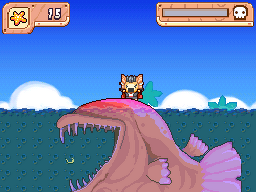 Count Choco after being freed from his cage.

“Argh! Yar Angler King
Me crew is no match for a sea monster like that!”

“Hero! Yer our only hope!
Head to the Village Island Gate and you can sneak up behind the Angler King!”

“You're persistent... I'll give you that.
Why do you continue to help these... things?
You're powerful... they don't deserve your help...”

“You defeated the Angler King?”

“Well, the Angler King was a legend!”

“I figured you could handle it...”

Music themes used within this level.