Start a Wiki
“This is simply much more lively ever since that dreadful pirate left.”

Antoinette is a Raposa in Drawn to Life: The Next Chapter. She resides in the east side of Watersong.

She is first talked to after The Hero restores color to the eastern side of Watersong as well as Roses's Mansion. She, along with Desiree, Francois, and Leopold will request help from The Hero.

Antoinette is an orange-furred Raposa with bright-pink hair. She has a cyan dress with a golden trim near the neck and skirt. A matching cyan flower is located under her left ear. 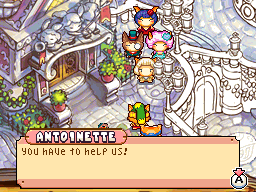 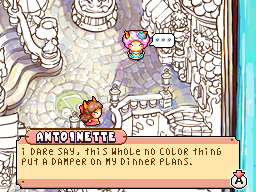 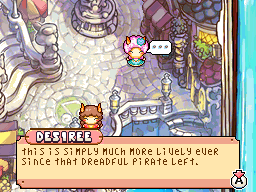 Antoinette watching Rose's performance.
Add a photo to this gallery
Retrieved from "https://drawntolife.fandom.com/wiki/Antoinette?oldid=57630"
Community content is available under CC-BY-SA unless otherwise noted.