Drawn to Life Wiki
Register
Don't have an account?
Sign In
in: Non-Canon, Article stubs, Drawn to Life: The Next Chapter (Wii),
and 7 more

View source
“These items will grant me power that rivals the Creator himself!”

The Artifacts of Power, also known as the Items of Power, are items in Drawn to Life: The Next Chapter (Wii) that come together to form a Dark Mannequin as part of Wilfre's backup plan to defeat the Creator.

The Crystal Mask is a triangular mask that seems to not have any visible holes in they eyes or mouth. It has was looks like yellow feathers coming from the top of the mask. The base of the mask is yellow, has red decals on the forehead, nose, and mouth sections of the mask, and has blue decals on the eye sections.

The Pen and Pencil are two objects, but still count as one Artifact of Power. The Pen is a red inkwell pen with a golden tip, and the Pencil is a standard, yellow, wooden pencil.

The Eternal Furnace is a purple, metal furnace that is about four times the size of a Raposa.

Branches from the Tree of Ages

As Jowee and the Hero arrive in the Monkey King's throne room, found in Treetop Village, they find Zsasha held captive by the King. The Monkey King tells the Hero to clear out the Shadow Walkers infecting the area before they can talk to him. After they do, the King and Zsasha admit that they had a mask that caused the Shadow Walkers to come to them, so they give the mask to the group as they leave.

Later on, while Jowee and the Hero are traversing Shadow Palace, they notice a shadowy figure walking away with some sort of notebook. They return to Raposa Village after seeing this and report back to Mari and Circi. They are told to go retrieve the notebook, so the two return to Shadow City to get it.

Eventually, the Hero comes across a room with a giant ink vat with the notebook resting on top of it. When the Hero collects it, it is revealed to be Wilfre's Journal. Suddenly, the vat begins to burst, and Shadow begins to fill the room. The Hero climbs up the tower, and eventually comes to a clearing. When the shadow gets to the clearing, it comes to a halt, and the Boss rises out of the shadow. It will attack the Hero and eventually exhaust itself, revealing it's weak spot. The Hero attacks it and the Shadow begins to rise again until they reach another clearing. The Hero attacks the new weak spot, the shadow rises again to a final clearing, the tip of the tower, attacks the final weak spot, and defeats the Boss. The Hero then finds a Pen and Pencil suspended in midair, and collects them before returning to Raposa Village.

When the two return to the Village, Jowee, Mari, and Circi read it and find that Wilfre plans to gather the Artifacts of Power to try to destroy the Creator. They realize that they already have the Crystal Mask, given to them by the Monkey King, and the Pen and Pencil they just acquired. They decide to set their sights on the Eternal Furnace next, and Mari tells Jowee and the Hero to ask Pirate Beard for any information about the Icy Wastes.

After exploring the Wastes and helping DJ and Erika, Jowee and the Hero check back in with Mari and Circi. Circi reveals to the group that Wilfre's Journal mentions the Eternal Furnace frequently, and deduces that it must be important to his plans. Mari then tells the group that while the two were in The Baldy Slopes, Mike had returned from his trip. When he did, Mari told him what had happened, and he ran straight into the Icy Wastes to try and find the Furnace. Worried for his safety, the group wonders how they would be able to catch up to him when Circi mentions the Frozenini. With that, Jowee and the Hero run back into the gate to find and rescue Mike.

When they find Mike, Jowee asks Mike why he ran into the Wastes, and he tells the two that he had a dream that if he sought the Furnace, he would find it. He then says that he knows where it is, and the three leave Frozenini. When they return to the Village, they meet up with Mari. Mike then tells her that he knows the location of the Eternal Furnace, and marks it on the Hero's map. Jowee and the Hero then return to the Icy Wastes to find the Furnace.

When the two get to the the Tree of Ages to get the final Artifact. After traveling through the Eastern Winds, the two eventually come across where the tree should be, only to find that it had gone missing and the land was crawling with Shadow Walkers, Shadow Bats, and Giant Shadow Walker. They decide to navigate through The Maze of Ages to replant the tree. After drawing the Acorn of Ages and the Rain Cloud, the Tree sprouts again and grants everyone access to the final room of the maze. When the Hero makes their way through the room and draws the Leaves of Ages, the Tree drops the Branches from the Tree of Ages, the final Artifact of Power. The Hero collects them and returns to Raposa Village.

When Jowee and the Hero return from The Maze of Ages, Mari and Circi join them in celebration that Wilfre won't be able to carry out his plans. Circi tells the three that shes going to lock up the Branches from the Tree of Ages in Village Hall and see what else she can learn from Wilfre's Journal.

At Village Hall, Circi begins to laugh to herself as now, all the Artifacts of Power were gathered in one place. Jowee, Mari, and the Hero hear her and run to the hall to see whats happening. Jowee notices the Eternal Furnace with Circi and questions how she got it. She begins to admit to the group that not only had Wilfre never returned, but it was her who orchestrated the plot of the game.

Circi then takes the Artifacts of Power and puts them together to from the Dark Mannequin. She then tells the group that she and Wilfre were in a relationship, and taking the Book of Life, she begins to try to draw Wilfre onto the Mannequin. However, she forgets what he looks like and begins to break down.

She tears pages out of the book and starts to cry, cursing the drawings she made. Suddenly, her scribbles take a sentient form on the mannequin and it attacks her, presumably killing her. The village begins to flood with Shadow, and the Dark Mannequin begins to attack outside Village Hall. Mari and the Hero find themselves on top of the Hall, and Mari begins to provide the Hero with hearts. The Creator then calls out to the Hero, urging them to defeat the Giant Scribble Monster.

The battle begins with the Dark Mannequin rising from the shadow, and shortly afterwards, the Crystal Mask detaches from the body and flies around the map. While the mask is floating around, the Giant Scribble Monster will arise from the Shadow and try to attack the Hero by roaring and flailing its arms. To progress the fight, the Hero must attack the mask 3 times. Then, the mask flies back to the mannequin and the Hero must ground pound the completed mannequin a total of 25 times. However, the mask will periodically detach itself from the mannequin and begin to fly around once more, where it will need to be hit 3 more times. After the mannequin is defeated, it will slowly rise up into the air as the Shadow dissipates from the village below.

After the village is cleared of shadow, the Raposa throw a celebration, and Jowee and Mari talk about how Wilfre's influence has taken both the Mayor and Circi from them. The Creator tells them that he will take the Artifacts of Power and cast them into the sea, where they can never be used again. The Raposa agree to celebrate by eating Cookie's feast, and the game ends with the Hero returning to Village Hall. 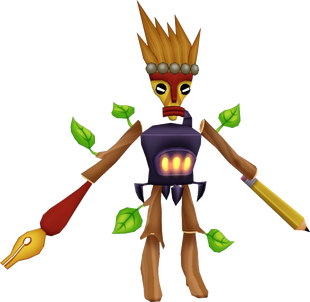 The Artifacts joined together to form the Dark Mannequin.
Community content is available under CC-BY-SA unless otherwise noted.