Pirate Baki are Baki enemies that reside in some water-based Watersong levels. They are composed of two pink-themed generic Baki (except that one is wearing a pirate hat) riding in a small rowboat and tend to drop exploding bombs or barrels at random.

Once defeated, their vessel will explode, probably due to the high volume of explosives stored on-board.

Pirate Baki are generic tan-furred Baki wearing stereotypical pirate attire. They steer a small, two-manned, wooden rowboat with golden trim. A lantern can be seen at the front of the boat, and a small bag can be seen near the oar. 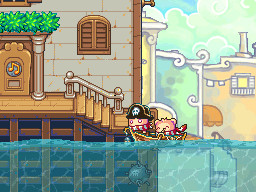 Pirate Baki in a level dropping a bomb.

Pirate Baki on a level card.
Add a photo to this gallery
Retrieved from "https://drawntolife.fandom.com/wiki/Baki_Pirates?oldid=58476"
Community content is available under CC-BY-SA unless otherwise noted.