The Beach is a location in the northernmost part of the Raposa Village in Drawn to Life.

It is where the Lighthouse can be seen, and where Pirate Beard's ship comes to dock in the port. The villagers come there to play often after The Hero retrieves the Beach Toys Template, as beforehand they said it was too empty and boring.

Upon defeating Deadwood The Hero is asked by The Mayor to clear the darkness from the path to the northern beach. Once this has been done the player is asked to explore the northern beach, and it is then that Mari and Jowee can be found, who give The Hero the Template for the Flippers. 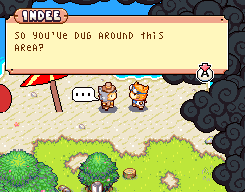 Add a photo to this gallery
Retrieved from "https://drawntolife.fandom.com/wiki/Beach?oldid=57739"
Community content is available under CC-BY-SA unless otherwise noted.