Bell Crabs are enemies found in some Watersong levels in Drawn to Life: The Next Chapter.

They are similar to Baki in that they do not actively pursue The Hero. However, unlike Baki, Bell Crabs can't be killed by being jumped on due to their bell-shell protecting them. Instead, the use of a weapon is required in order to defeat them. If The Hero jumps on the Bell Crab, the bell on its back will vibrate and produce a ringing sound. The crab will also pause and hide in the bell for a period of time.

They won't walk off platforms they're pacing on, and instead will simply turn around they encounter an edge.

Bell Crabs very closely resemble real life hermit crabs, with the exception of their shell, which is replaced by a bell. They have orange bodies and their bell is a shiny gold. 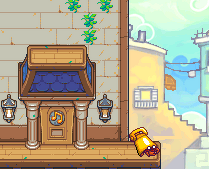 A Bell Crab in a level. 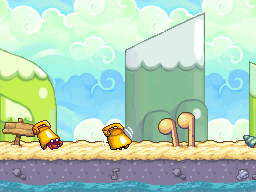 Two Bell Crabs in a level.
Community content is available under CC-BY-SA unless otherwise noted.
Advertisement