Drawn to Life Wiki
Register
Don't have an account?
Sign In
Advertisement
in: Non-Canon, Enemies, Enemies in Drawn to Life: The Next Chapter (Wii),
and 2 more

Bonobo are enemies that first appear in Jangala's first level, Jangala Floor. They appear in every Jangala level after this.

Bonobo are some of the only non-ranged enemies that actively target the Hero in Jangala. When they spot the Hero, they will run towards them, spear pointing out.

Bonobo are lavender-skinned, humanoid creatures with two, white, bulbous eyes, a purple upturned nose, and a mouth of sharp, yellow teeth. They also have markings around their eyes and on their forehead that are the same color as their nose.

They have long, blond hair that is shaped straight up in the air with an off-white bone tied around the base. They wear a necklace that is made of yellow beads, red feathers, and a skull as the focal piece. It also wears a loincloth made of leaves. In their left hand, they hold a spear that is decorated with more red feathers.

The beta form of the Bonobo seen in a promotional video for Drawn to Life: The Next Chapter (Wii). 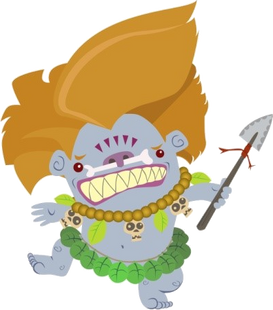 The Bonobo as seen in concept art for the game.