The Box Monster is an enemy in Drawn to Life: The Next Chapter. It only appears in Wilfre's Wasteland.

Box Monsters move on a pre-determined pathway and do not specifically target The Hero. Most of the time, the path they follow is indicated by Rapo-Coins.

Box Monsters, as the name implies, resemble brown cardboard boxes. They have a total of four, seemingly metallic, feet which are in pairs, two on both vertical ends of the creature. The body is covered with a cardboard box with two strips of tape going across the top and bottom folds. There is an opening in the center of the cardboard box which reveals two white eyes. 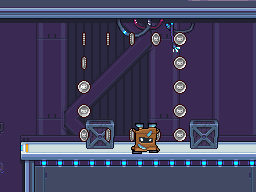 A Box Monster in Toggle Tower.
Add a photo to this gallery
Retrieved from "https://drawntolife.fandom.com/wiki/Box_Monster?oldid=57696"
Community content is available under CC-BY-SA unless otherwise noted.