“Like, I'm so tired of blue clothes all the time. They call it a "uniform," but I call it just plain boring.”

Chandice is a Raposa in Drawn to Life: The Next Chapter. She resides in the west side of Lavasteam on the bridge over the lavafall. She rarely moves from this location. She is almost always seen near or to the right of her friend, Nanci, who takes on a similar appearance and personality as she does.

Chandice speaks as a stereotypical teenager would, constantly using "like" as a filler or discourse marker, or by using slang. She seems to adopt the same stereotypical mannerisms as well.

She can be heard complaining about the lack of variety clothing wise, saying that it is boring to wear the same blue uniform all the time.

Chandice is a teenage Raposa with blonde hair put up in pigtails. She wears a bright blue dress and a white knitted apron with two adjustable strings near the neck. A matching blue bonnet can be seen on her head. This outfit is the standard uniform for all female Raposa in Lavasteam. 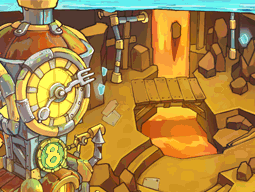 The area in which Chandice resides. 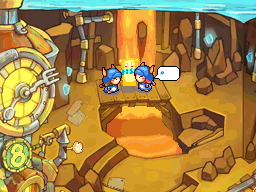 A hero stuck between the two Raposa.
Add a photo to this gallery
Retrieved from "https://drawntolife.fandom.com/wiki/Chandice?oldid=56617"
Community content is available under CC-BY-SA unless otherwise noted.