“You know the best thing about Lavasteam? My sister's here!”

Cherry is a Raposa in Drawn to Life: The Next Chapter. She resides in the east side of Lavasteam next to the Magma Flow Factory.

She has an older sister named Melon, who she adores and follows everywhere. While Cherry wasn't tasked with a job of any sort, probably due to her young age, she was still required to wear a standard uniform.

Cherry is a young Raposa with blonde hair put up in pigtails. Like the generic Rapo Girl sprite in the first game, she wears a blue button-up dress. She has two blue hair bobbles on her pigtails. 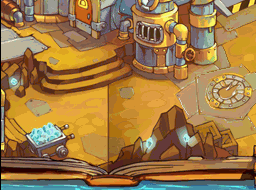 The area in which Cherry resides.
Add a photo to this gallery
Retrieved from "https://drawntolife.fandom.com/wiki/Cherry?oldid=52813"
Community content is available under CC-BY-SA unless otherwise noted.