Not to be confused with Circi.

Cindi is the daughter of Isaac and Mya. She is a young RapoGirl who lives in the Raposa Village with her parents. Cindi enjoys her mother's Banya cupcakes and doesn't like Rapoboys very much. In all of her appearances, she tends to be in trouble early in the game.

Cindi is a young Raposa girl with brown hair that is tied in pigtails. She wears a blue dress with white buttons and has two blue hair bobbles on her pigtails.

In the original game, Cindi was thought to have disappeared convincing Isaac and Mya to leave the village in order to find her. The Hero soon discovers that she was really hiding behind The Creation Hall thinking that there was a game of hide-and-seek going on. Once The Mayor is saved, she hears that her parents were kidnapped by Shadow Creatures and decides to go in the Snow Gate to rescue them. She is then taken hostage, forcing The Hero to save her from Mt. Snowy.

Once all the color disappears, Cindi escapes with the remaining Raposa onto Turtle Rock. She is soon attacked by wild Baki from Baki Basement, forcing The Hero to go in and defeat them. Despite Cindi's desires, she isn't allowed to attend the crew's meetings because her father said she isn't a "swab", a term Pirate Beard calls the rest of the villagers by. 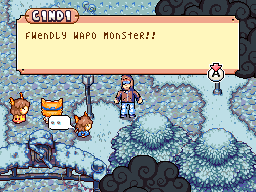 Cindi talking to a Hero near the start of Drawn to Life. 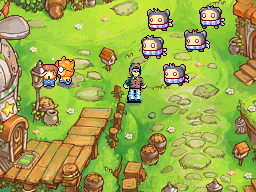 Cindi hiding behind her father. 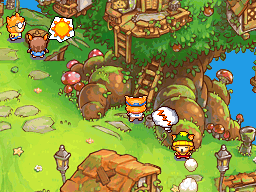 Cindi sitting with her father, Isaac.
Add a photo to this gallery
Retrieved from "https://drawntolife.fandom.com/wiki/Cindi?oldid=58391"
Community content is available under CC-BY-SA unless otherwise noted.