Drawn to Life Wiki
Register
Don't have an account?
Sign In
in: Featured Articles, Raposa, Characters,
and 10 more

“These poor starving Rapos... they are in need of my delicious dishes!”

Cookie, although kind-hearted, is ambitious and high-spirited. He is very critical of his assistants, always noting when they do not meet his expectations. However, he believes in them and thinks they will eventually master the kitchen. He seems to believe his status as chef gives him power over other Raposa, most notable when he threatens to burn Isaac's next Banya order and proudly boasts to Miney about his occupation. Cookie has an obvious stingy trait, often fueling his quarrels with Isaac. The chef treats cooking as an art, and dislikes it when Raposa take more than their fair share.

Not much is known about Cookie's life before the events of Drawn to Life. It is known that Cookie has lived in the Village long before Wilfre's dabbling in the Darkness forced him to leave in pursuit of a better life.

Cookie is an orange-furred, adult, male Raposa. Being a chef, he dresses in a white apron that protects him from the stains of the kitchen. Adorning this occupational garment is a single red stripe, streaking horizontally across the middle. Underneath this, he wears a plain green shirt. A matching chef's hat tops his head

In his Wii form, Cookie's appearance is changed slightly. His apron is colored red, matching the twin stripes that decorate his hat. He also has a splotchy brown mark around his right eye.

After the destruction of the Book of Life, Cookie and his assistants eventually leave the village, searching for a better life. The three are eventually captured and imprisoned by Shadow in Banya Fields, where they stay until The Hero rescues them. When they return to the village, Cookie asks The Creator to clear the darkness around his Restaurant and to design a marvelous Sign to advertise its reopening.

Later in the story, Cookie is tasked with the job of baking a feast for Mari's festival. Progress is halted when a mob of hungry Raposa storm the restaurant. In Cookie's hour of need, Tubba, a large Raposa who eats tons and is disliked by the chef for this, comes to the rescue and defends the Banya. After this courageous act, Cookie apologizes to the bulbous fellow and the two are now on good terms. Near the end of the game, he and Isaac get into a fight over supplies, and Cookie promises to burn Isaac's next order of Banya Bread.

In the Wii version, Cookie helps the player throughout the game, mainly while navigating Floating Meadows and Balancing Rock Garden.

Cookie calls the Hero and Jowee to his shop before the two explore the Floating Meadows, telling them that the windmill blades have been stolen. The two decide to return to Eastern Winds in order to find new blades thanks to Circi's pestering. When they return with the blades, Cookie offers to bake them a cake.

Later on, Cookie asks the Hero and Jowee if they know where the wedding party was. He then remembers that the two went to the Balancing Rock Garden to find a good spot for a honeymoon. The Hero and Jowee return with the couple, and Cookie returns to making the wedding feast.

Throughout the game, certain Raposa will give the Hero certain challenges to complete. Cookie offers the Hero some extra collectibles for six specific levels. Specifically, he asks the Hero to get him ingredients. The specific challenges are show below:

Drawn to Life: The Next Chapter (DS)

Cookie returns in the sequel and is sucked into a vortex created by Wilfre when all of the color is drained from the village. He, along with Farmer Brown and Count Choco, are spat out in Lavasteam. They are immediately discovered by Miney and his Robosa and put to work mining Banya Crystals. They are eventually rescued by The Hero and then go to Turtle Rock. On Turle Rock, Cookie can often be seen behind Jowee's Room. 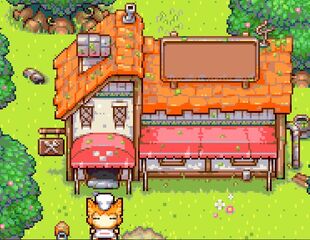 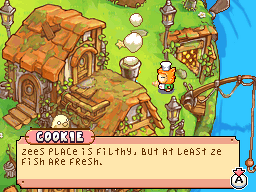 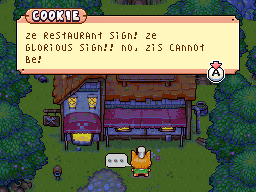 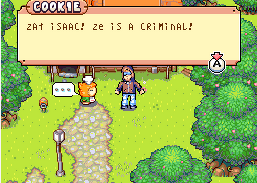 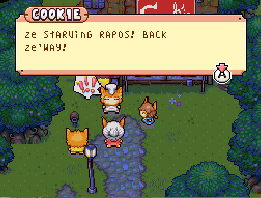 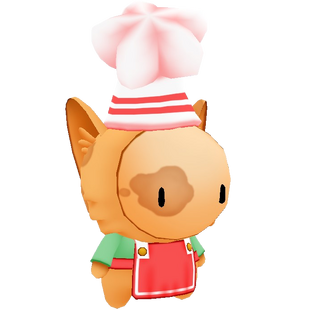 Cookie's talksprite in Drawn to Life: The Next Chapter (Wii).
Community content is available under CC-BY-SA unless otherwise noted.