Not to be confused with Crazy Barks.

Crazy Diggz is a Raposa in Drawn to Life: The Next Chapter who resides in the eastern half of Lavasteam. He appears to be a Lavasteam counterpart to Crazy Barks. Crazy Diggz acts, talks, and looks similarly to Crazy Barks. When The Hero speaks with him, he says he likes to eat Banya Crystals. This does not prove they are edible, however, as it may just be him being "crazy".

Crazy Diggz can only be talked to after the creation of the Lavabridge.

Crazy Diggz has grey fur, a mustache and a beard similar to Crazy Barks's. Also like Crazy Barks, he has two completely white crazy eyes. He wears a brown hat, brown overalls, and a green shirt underneath. In most of his sprites, he can be seen holding a mining pan. 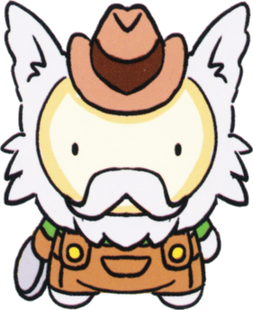 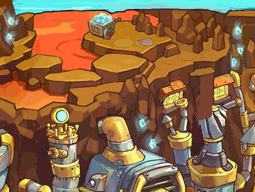 The area in which Crazy Diggz resides.
Add a photo to this gallery
Retrieved from "https://drawntolife.fandom.com/wiki/Crazy_Diggz?oldid=56597"
Community content is available under CC-BY-SA unless otherwise noted.