N/A
(Sometimes referred to as male)

“Let there be color.”

The Creator is the term used for the player and God of The Drawn to Life series.

As the name implies, they are the creator of the Raposa World and the Book of Life. Throughout the course of the games, The Creator sends The Creation Hero and restores color to the world. The Creator can speak directly to the Raposa and interact with their world; though usually with The Hero as the intermediary. The Raposa doubted them at first when the Eternal Flame burnt out, but have resumed trusting in them.

Long before anything existed there was The Creator, who designed the Book of Life. The Creator drew everything in the book and brought it into existence. First, The Creator formed a circle and drew the world. Then they populated the world with forests, and finally created the Raposa.

Several years before Mari was born, Wilfre questioned why the Raposa were forbidden to design their own creations. He then stole the Book of Life. When he was chased out of the Raposa Village, he tore the book in blind fury and ruined the key pages before tossing them into the wind. The Creator grieved over the loss, and sealed off Creation Hall. Without the pages or The Creator, the village began to wither away. Darkness crept in, and the Eternal Flame flickered out.

When Wilfre destroyed the Book of Life, The Creator fell into a great depression and essentially left the village to wither away. When Mari prayed to The Creator, they answered and instructed her to gather what villagers are left at Creation Hall. The Creator then filled a mannequin with their presence to create The Hero to help relieve the village of the suffocating darkness, restore the village to its former glory, and defeat Wilfre.

When Wilfre stole the color from the village, The Creator sent Turtle Rock as a place of refuge for the Raposa.

The Creator revives The Hero after Wilfre begins to drain the color from them, and proceeds to disarm him of his Scepter. This allows The Hero to defeat Wilfre once and for all. 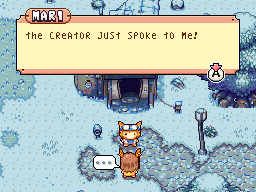 Mari and Jowee talking about The Creator. 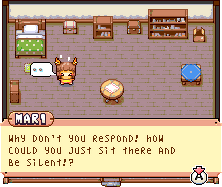 Mari yelling at The Creator.
Community content is available under CC-BY-SA unless otherwise noted.
Advertisement