Cricket's Station is a building in Drawn to Life doubling as a police headquarters and a containment unit. It is located in the southern-most portion of the village.

After Cricket is rescued from Moon Grove, before he can use the building, The Hero must rid it of Darkness by touching the Eternal Flame and making the clouds disappear. Once it is cleared, Cricket will spend the majority of his time standing by the station.

Like many buildings in the game the station's architecture is abnormal; being more tower-like and built upon a tree stump which supports a balcony next to a cell. There is a small emblem above the door with a star engraved onto it. The building also has a chimney and a propeller. 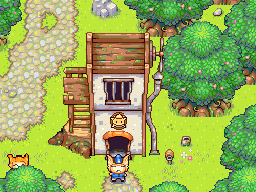 Cricket in front of his station.
Add a photo to this gallery
Retrieved from "https://drawntolife.fandom.com/wiki/Cricket%27s_Station?oldid=56720"
Community content is available under CC-BY-SA unless otherwise noted.