Start a Wiki
“Quick! Everyone get to me ship!”

The Dock is a building in Drawn to Life located in the northwestern portion of the Village.

The dock area consists of a boathouse and the village dock. The overall design of the two buildings remains mostly constant throughout both games, simply taking on a more isometric style in the sequel; the only difference being the number of wooden planks and stair steps that are present.

The boathouse has the typical orange roof most buildings in the village have. It appears to have two floors. The second floor completely consists of a wooden deck. The dock, like the deck and support beams of the building, appears to be made of wood. The dock also appears to have a set of wooden stairs leading up to it.

After it is cleared of Darkness and the Lighthouse is colored in, Pirate Beard's ship lands here. At the end of the game, the dock is seen again, when the ship departs with Jowee seemingly on board.  Later, it is  revealed that Jowee actually changed his mind about going on the treasure hunt and decided to stay behind with Mari, choosing her over adventure.

The Lighthouse can be seen from here.

When Wilfre is draining the village of its color, the remaining villagers that he does not capture with a portal (namely Mari, Jowee, Pirate Beard, Isaac, Cindi, and Crazy Barks) come here in the hopes of escaping on Pirate Beard's ship. However, upon arriving they discover that someone has taken the ship away.  After a quick, desperate prayer to The Creator, Turtle Rock appears (a "legendary beastie", according to Pirate Beard), and the villagers escape onto there from the Dock.

The Dock is the last area of the village to lose its color, only doing so once Mari leaves for Turtle Rock. 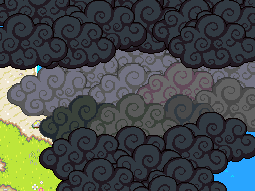 Clouds over the Docks. 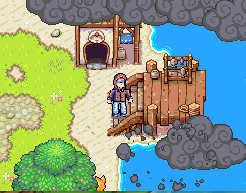 Clouds being cleared from docks. 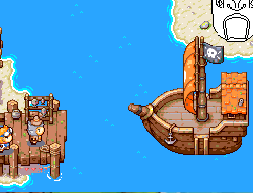 The Dock and the Pirate Ship.

Add a photo to this gallery
Retrieved from "https://drawntolife.fandom.com/wiki/Docks?oldid=57756"
Community content is available under CC-BY-SA unless otherwise noted.