“I should build a hospital here!”

Dr. Cure is the doctor in the Village. She is rescued in Rapo Towers, along with an Old Rapo and Young Rapo, both of which are her assistants.

Dr. Cure claims to be the best doctor around, but was unable to save The Mayor after Wilfre's attack. In the end of Drawn to Life, she decides that she wants to open a hospital in the village, and although it is mentioned in the beginning of the sequel, it is never shown.

As she believes she is the best doctor in the village, she will get defensive if anyone offends her dignity. The games never reveal much about her past. It is known that she has always been a doctor until the Shadow came, convincing her to leave and go to Rapo Towers in order to start a new life.

Ironically, in Drawn to Life she is seen constantly coughing in her idle animation.

The Hero rescues Dr. Cure from the Shadow creatures who held her captive along with her patients in Rapo Towers. When they returned to the village, it was discovered that The Mayor had been gravely wounded while The Hero was away.

Dr. Cure attempts to heal the Mayor, but fails, leaving the scene and saying she can't do anything to help him. After she leaves, his body vanishes, much to Mari's dismay.

Dr. Cure, Tubba, and Bubba are kidnapped by Wilfre's shadow portals and taken to levels in Wilfre's Wasteland where the Hero can optionally rescue them. 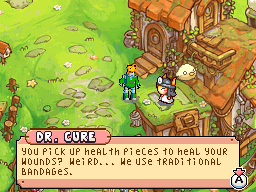