“Your Hero. Your adventure. Let your imagination run wild with 2 creative games!”

“A shadow-like evil has covered the Raposa' village with darkness only you can help save their dying village by creating the ultimate Hero!”

“Once again, the Raposa need your help! Draw your way through the action as you help save their civilization. Draw yourself into the excitement!” 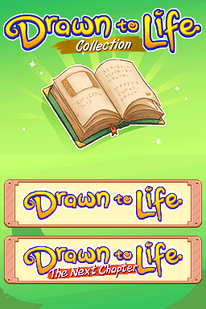 The Book of Life as seen on the title screen.
Add a photo to this gallery
Retrieved from "https://drawntolife.fandom.com/wiki/Drawn_to_Life:_Collection?oldid=62979"
Community content is available under CC-BY-SA unless otherwise noted.