Drawn to Life Wiki
Register
Don't have an account?
Sign In
Advertisement
in: Non-Canon, Article stubs, Drawn to Life: The Next Chapter (Wii), Games

Not to be confused with Drawn to Life: The Next Chapter for the DS.

–Drawn to Life: The Next Chapter Box Art

Like the previous Drawn to Life, Drawn to Life: The Next Chapter is a platformer in which the player draws their own Hero to play as. New to the game is Action Drawing mode, which allows the player to draw directly into the game.

The game is set after the original Drawn to Life, and Mari is now the mayor of the Raposa Village. She also has an assistant named Circi. The creations of the village are being stolen, so The Creator sends The Hero to help the village once again. Jowee suggests that Zsasha has stolen the items and ran off into Jangala. Mari sends The Hero and Jowee to Jangala to find Zsasha, but they find out that Zsasha has been held captive by the Monkey King. Mari then realizes that Zsasha didn't steal the items, and fears that Wilfre has returned. She sends The Hero and Jowee to Shadow City to check for signs of Wilfre's presence. They find the ink factory making Shadow Creatures again, and they also find Wilfre's Journal which holds a plan to destroy The Creator. To do that, he needs the four Artifacts of Power: Branches from the Tree of Ages, a Pen and Pencil, the Eternal Furnace and the Crystal Mask. They already have a pen and pencil from Wilfre's journal, and the mask was given to them by the Monkey King. Mari then sends The Hero and Jowee to the Icy Wastes to retrieve the Eternal Furnace. After they find it Galileo tells them that the Tree of Ages is in trouble. The Hero goes to save it and obtain the branches. When all the items are together, Circi then reveals that she is in love with Wilfre. She uses the artifacts to try and bring Wilfre back from the dead and attempts to draw him, but forgets what he looks like. She accidentally creates the Giant Scribble Monster that attacks her and the village. The Hero must defeat it, and then the Raposa celebrate with a feast.

Jangala is the first gate in the game. It has a forest theme and is split into 6 levels. This gate has no boss, and the Artifact of Power found in this gate is the Crystal Mask.

Shadow City is the second gate in the game. It has a shadow theme and is split into 6 levels. The boss of this gate is the Boss, and the Artifact of Power found in this gate is the Pen and Pencil.

Icy Wastes is the third gate in the game. It has a icy theme and is split into 6 levels. This gate has no boss, and the Artifact of Power found in this gate is the Eternal Furnace.

Eastern Winds is the fourth and final gate in the game. It has a sky theme and is split into 6 levels. This gate has no boss, and the Artifact of Power found in this gate is the Branches from the Tree of Ages.

Although not technically a separate gate, the final level of the game happens here. The boss of this "gate" is the Giant Scribble Monster, and no Artifact of Power is found here.

Action Drawing can be done during gameplay within certain areas defined by dashed lines, using the Wiimote as a pointer to draw. 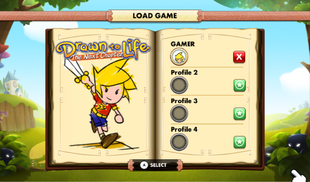 The title screen for the game. 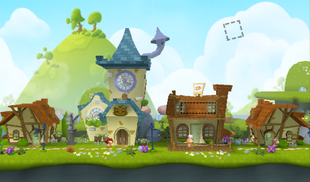 The establishing shot for Raposa Village in the game. 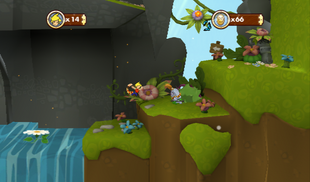