Drawn to Life Wiki
Register
Don't have an account?
Sign In
Advertisement
in: Galactic Jungle, Enemies, Enemies in Drawn to Life: The Next Chapter,
and 2 more

Duck Sentries are completely stationary and tend to be mounted on walls or support columns. Despite being immobile, they still pose a significant threat to the Hero because of their ranged plasma-ball attack. Because of the accurate nature of the attack, and the limited space available in some areas where they appear, a Duck Sentry's plasma attack may be difficult to dodge. Duck Sentries only have one health, so any attack made against them will result in their defeat.

Duck Sentries closely resemble ducks, their namesake. They are composed of colored metallic plates that form segments of the beak, neck, upper body, and the head. They have two red eyes and a long silver neck. A plasma-blaster is hidden within the beak. 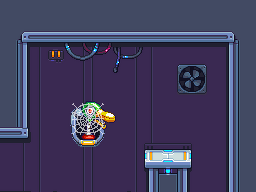 A Duck Sentry temporally disabled by a web.