Drawn to Life Wiki
Register
Don't have an account?
Sign In
Advertisement
in: Featured Articles, Enemies, Enemies in Drawn to Life: The Next Chapter,
and 4 more

Dynamite Moles are stationary, mole-like enemies found in some Lavasteam levels. They first appear in Crystal Caverns, and are later seen in some portions of Rocky Railroad.

Dynamite Moles wear hardhats, which means they cannot be killed by being jumped on and must be attacked using a weapon. Due to this, the best time to attack is when the Dynamite Mole is going through their "looking" animation, as they won't throw dynamite during this phase.

Dynamite Moles are semi-anthropomorphic enemies. They have purple fur all over their bodies except their hands, feet, and muzzle, and they wear a yellow hard-hat and carry a backpack full of dynamite sticks. Like many enemies in the Drawn to Life series, they have large white eyes. 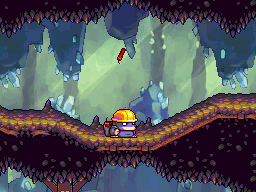 A Dynamite Mole throwing dynamite in a level.