Not to be confused with Mayor's Book or Your Name.

“Long ago, The Creator placed a special page in the Book of Life. Each mayor would visit Creation Hall and The Creator would write their name... This way, the mayor would have the authority over the other Raposa.”

The Final Page is the last page of the Book of Life recovered in Drawn to Life. It is found in Rapo Towers.

The Mayors of the Raposa Village would have their names written on this page by The Creator in order to give them authority over the other Raposa, so that they could rule the Village effectively.

The physical page itself has no unique appearance; instead, it looks identical to any other recovered Template. Even in Draw Mode (as Your Name), the page is similar in design to other creation templates, having a simple shape and predefined canvas size. However, while most templates are uncolored and left to the player to fill in, the Final Page starts off colored black.

When Wilfre ripped the pages out of the Book of Life, the Final Page was one of them. This made the page lost for many years.

At the end of Drawn to Life, The Mayor explains the function of the Final Page and how it is needed before Mari becomes Mayor. He then asks the Hero to get it for him as a personal favor. While the Hero goes to find the final page, the Mayor plans to prepare the village for the final showdown between the Hero and Wilfre.

Once the Final Page is recovered, The Mayor is discovered unconscious near the forest gate. Dr. Cure isn't able to save him, and he passes away. This causes Mari, the heir to the title, to be the next Mayor. The Hero then goes to defeat Wilfre in the final battle.

After Wilfre is defeated, Mari takes the final page and places it in the Book of Life. Mari says that she isn't ready to ask for her name to be written in the book and claims that she'll do her best to watch the village in the meantime. She then asks The Creator to write their name in the book until she is ready to be mayor. 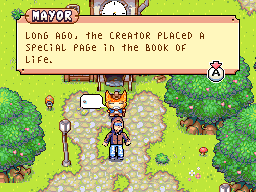 The Mayor talking to a hero about the Final Page.
Add a photo to this gallery
Retrieved from "https://drawntolife.fandom.com/wiki/Final_Page?oldid=57433"
Community content is available under CC-BY-SA unless otherwise noted.