“Oh, Hero, what a merry coincidence. I was just extolling on your heroics.”

Francois is a Raposa in Drawn to Life: The Next Chapter. He resides in the east side of Watersong. He is the one who sculpts the statue in the middle of Watersong.

If the player approaches Francois, he will ask The Hero to restore color to the fountain in the eastern section of Watersong. After the fountain is restored, he asks the hero to design a statue he can construct. Once the statue is designed, it can be seen on top of the Watersong Fountain.

Francois is an adult, brown-furred Raposa with horizontal or squinted eyes in his sprite. He wears a dark-teal suit with red neck cuffs and a white undershirt, a golden button can be seen on his suit. The top-hat he wears matches the overall color-palette of the suit.

He wears a monocle over his left eye and is seen adjusting it in his "Idle" animation. 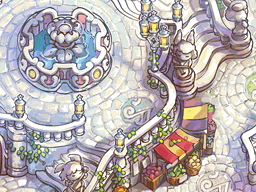 The area in which Francois resides.

Francois watching Rose's performance.
Add a photo to this gallery
Retrieved from "https://drawntolife.fandom.com/wiki/Francois?oldid=54927"
Community content is available under CC-BY-SA unless otherwise noted.