“Weak little hero... your time is at its end. Feel my wrath!”

Frostwind is awoken by Wilfre to destroy the village after he himself fails to steal the Book of Life, due to being confronted by The Hero, Mari, and Jowee. Shortly after he leaves the village, the ground begins to shake, sending the Raposa into a panic. The Mayor then instructs The Hero to go into the Snow Gate to defeat Frostwind, to keep it from destroying the village.

This boss battle is composed of three "phases" in which the player must navigate through in order to defeat Frostwind and to save Heather. Frostwind has four health, though it cannot be damaged by projectiles or regular jump-attacks, and inflicts damage to the player through contact and ice-spike projectiles.

Frostwind is an enormous, limbless dragon with a forked snake-like tongue. It is covered in blue scales that become lighter in color near its stomach. Frostwind has a large head with a frill near its jaw, short horns, and sharp pointed teeth. There are two odd waving tentacle-like appendages near the end of its body.

Frostwind is composed of seven identical body segments (not including the head and tail).

The battle with Frostwind is separated into three sections, or phases.

In the first phase, Frostwind chases The Hero throughout a semi-flat segment of the level with many "bottomless" pits. Once the battle begins, the screen will auto-scroll to the right, forcing the player to keep moving at a steady rate. The player must stay in the center of the moving screen and fire occasionally at Frostwind using their Snowshooter in order to keep the boss from getting too close and inflicting damage through contact. Shots fired at Frostwind will not inflict damage to it, and will only prevent the boss from advancing closer to the player. At some points, Frostwind will fly into random pits in order to ambush The Hero as they approach.

At some point, the player will reach the end of the auto-scrolling segment and will advance to the second, and final, segment of the level. This marks the start of the second phase of the fight. Now, the player is limited to a single, small, flat, elevated platform [1] with Heather trapped in a cage hanging from a ledge far above the player. The player must now avoid projectile and contact-based attacks from Frostwind. Frostwind may now be damaged during this phase by shooting the boss to temporarily stun it, then butt-stomping (commonly called ground-pounding) its head.

After losing three-quarters of its health, Frostwind will gain a red tint and his attacks and movements will become faster. This indicates the third and final phase.

If the player runs out of ammunition or is heavily damaged during the second and third phases, Heather will occasionally throw out helpful items to assist The Hero.

Once defeated, the Shadow Cage containing Heather will fall and break, freeing her. 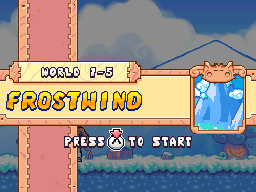 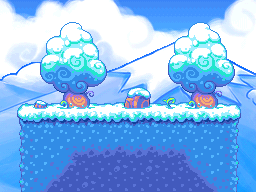 The platform used in phases two and three. 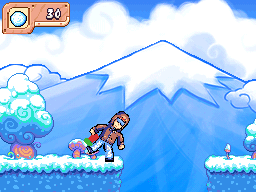 A hero looking down a pit automatically. 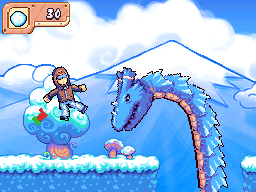 Frostwind scaring a hero at the start of the level. 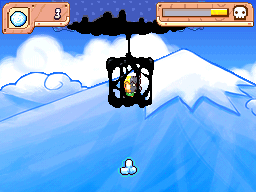 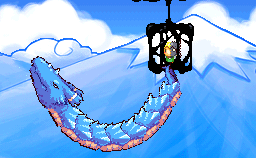 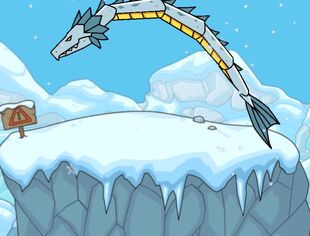 A Scribblenauts unlimited level similar to Frostwind.
Add a photo to this gallery
Music themes used within this level.

Retrieved from "https://drawntolife.fandom.com/wiki/Frostwind?oldid=58434"
Community content is available under CC-BY-SA unless otherwise noted.