Start a Wiki
“Have you tried the gondolas yet? The first ride is compliments of Watersong!”

Gabriel is a Raposa in Drawn to Life: The Next Chapter. He resides in the west side of Watersong.

Gabriel runs the gondolas that ferry people over to the east side of Watersong and back. Jowee, Mari, and The Hero meet him shortly after they enter Watersong and help him get the gondolas back up and running by finding the Skylamp Gong.

Gabriel is a young-adult/middle-aged Raposa with orange fur. He has a light-blonde wig put up in side-buns. Gabriel wears a saturated khaki suit with matching pants. A white undershirt can be seen through the neck of the suit. 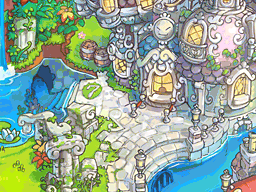 The area in which Gabriel resides.

Color being restored to the gondola port.
Add a photo to this gallery

Retrieved from "https://drawntolife.fandom.com/wiki/Gabriel?oldid=55817"
Community content is available under CC-BY-SA unless otherwise noted.