Drawn to Life Wiki
Register
Don't have an account?
Sign In
Advertisement
in: Drawn to Life: The Next Chapter, Galactic Jungle, Locations,
and 3 more

The Galactic Jungle is located in the D.O.T.R.O.T.P.O.T.U.S.F. (Democracy of the Republic of the People of the United Space Fortress). It is the third village visited in Drawn to Life: The Next Chapter.

When the previous mayor passed away without a heir, the village fell into despair. The Raposa named Click, the mayor, created a puppet government in response. This government was called "The Council" which was composed of a bunch of dummies. This was done while he controlled the Galactic Jungle by himself from the Control Room. He pretended to be a messenger so no one would know that he was actually "The Council." The S.P.U.D. were also controlled by him. He used a hologram projector for them.

At first, Galactic Jungle had a decent mayor and the village was alright. However, he didn't have a heir so when he passed away the village became a republic and was run terribly. Wilfre noticed this and decided to take advantage of the Raposa called Click, who had terribly wanted to help his friends on the island. Wilfre told him to become the mayor in secret and create a government made out of puppets called "The Council" who gave laws of whatever the Shadow told him to. Many bad laws were spread causing people to break them and sent to prison. The Hero, Jowee and Sock arrived to see these bad rules, so they decided to talk to The Council about it. Eventually, they met Click who kept putting them into dangerous situations to try and cause them to turn back. The team kept going and eventually found him on a higher version of the village where he got banished. After taking out The King and Queen spaceship, Sock found the council room as they went in and found out about Click and the puppets. Jowee explained to Click that Wilfre wasn't to be trusted and he should admit it to all of the villagers. The group then convinced Galactic Jungle that Click didn't mean any harm. Instead, he wanted to save them. Click was then elected as mayor and the gang went back to The Turtle Rock to finish the adventure at Wilfre's Wasteland.

The Queen and King are the bosses of Galactic Jungle. They are fought in Treetop Turrets. 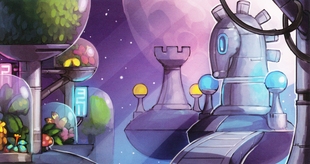 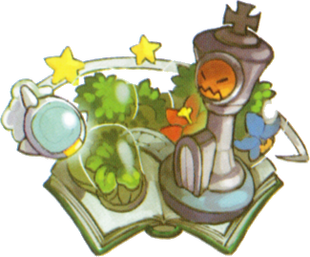 The Draw Mode canvas for this Village. 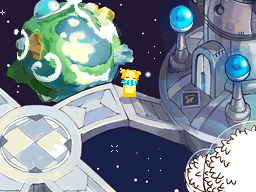 A hero exploring the second page of Galactic Jungle.

The dialog box that pops up to confirm if a player wants to restore Color. 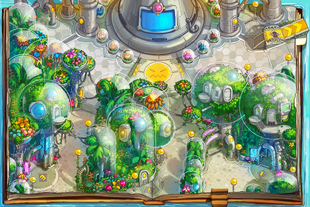 The "Ground" section of Galactic Jungle.
Community content is available under CC-BY-SA unless otherwise noted.
Advertisement