Galileo is a Raposa who appears in Drawn to Life and Drawn to Life: The Next Chapter (Wii). He is an astronomer.

He lives and works at the Observatory in the south-eastern half of the Village, where the player can view the Night and Day Sky. Galileo and the Template for his observatory are rescued from Star Forest. He isn't often seen interacting with other Raposa, or even leaving the observatory area. He also has very limited dialog for a non-generic Raposa.

Galileo has aureolin-yellow fur and a long white beard. He wears a red robe with a matching pointed red hat. He also appears to be wearing grey pants. 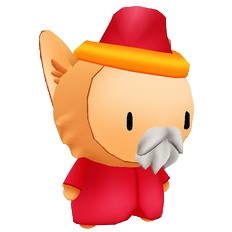 Add a photo to this gallery
Retrieved from "https://drawntolife.fandom.com/wiki/Galileo?oldid=57434"
Community content is available under CC-BY-SA unless otherwise noted.