The Giant Fork is a creation in Drawn to Life: The Next Chapter (Wii) that is drawn in Jangala Falls.

Once drawn, the Giant Fork will appear in a predetermined location. It has no impact on game play whatsoever, and are purely cosmetic.

Due to the Giant Fork being a creation object, the appearance of this object is completely dependent on the player.

The preset drawing for this creation is a wooden, four-pronged fork. 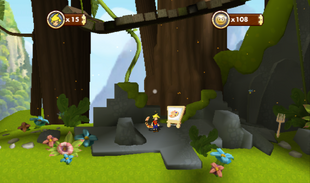 The area where this creation is drawn.
Add a photo to this gallery
Retrieved from "https://drawntolife.fandom.com/wiki/Giant_Fork?oldid=59793"
Community content is available under CC-BY-SA unless otherwise noted.