Helmet Dragons are enemies in Drawn to Life: The Next Chapter found in the levels of Watersong.

Helmet Dragons are creatures that live in diving helmets and attempt to attack The Hero when they get too close. These enemies attack by reaching out to The Hero and dragging them into the helmet. After a short period of time, and after The Hero has been damaged, the enemy will spit them out again.

The full appearance of the creature inside the helmet is unknown. They have long red tentacles (similar to those of an octopus or squid) and two squinted eyes.

The helmet itself is a large, broken, rusted-metal helmet with a snorkel on its left side. An unknown object sits on top of the helmet. 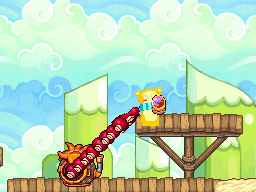 A Helmet Dragon reaching for a hero.

A Helmet Dragon in the level card of Rockin' Ruins.
Community content is available under CC-BY-SA unless otherwise noted.
Advertisement