“Hero can change into the form of a blob. As a blob, Hero can squeeze through tight spaces and engulf enemies with a ground pound. While an enemy is engulfed, Hero can roll over other enemies.”

The Blob Form is the second unlockable form for The Hero in Drawn to Life: The Next Chapter. It is unlocked and drawn in Lavasteam.

The Blob Form is capable of changing shape or becoming smaller in order to squeeze through small gaps. It can also encapsulate suitably-sized enemies by performing a Ground Pound on them.

Due to the Blob Form being a creation object, the appearance of this object is completely dependent on the player.

The drawn preset depicts a lime-green circle that can manipulate its shape in order to fit in certain places. The edges of this preset are darker and it appears to have an uneven surface. 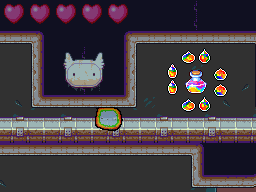 A Hero using their Blob Form to move through a small space. 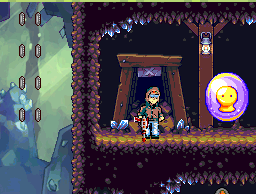 A hero about to collect the orb for the Blob form.
Add a photo to this gallery
Retrieved from "https://drawntolife.fandom.com/wiki/Hero/Blob?oldid=57959"
Community content is available under CC-BY-SA unless otherwise noted.