Start a Wiki
“This beach will be our secret... okay, Hero?”

The Hidden Beach, or The Secret Beach, is a location in Drawn to Life and Drawn to Life: The Next Chapter. It is located in the northern section of the Village, east of the main beach.

It is a small, secluded shore littered with seashells and aquatic animals. A boulder can be seen to the left of the beach near the sudden cliff-side that surrounds the shore like a wall.

Due to its small, hidden nature, it is a perfect place for serious meetings, or a sanctuary when a character, usually Mari, wants to be alone.

The Hidden Beach is cleared of Darkness after finishing Surf Beach, when Mari decides that the main beach to the west is becoming too crowded for her liking and asks The Creator to clear the small, secluded cove. She starts spending more time there past this point.
Soon afterward, The Mayor points out that it's nice, but feels a bit empty, and then suggests that The Creator plants a grove of Kori Trees for decoration.

The only characters to have seen the Hidden Beach are Mari, Jowee, The Mayor, Heather, and The Hero.

The ledge on the left is where the Mayor's Spirit and The Hero appear during the end credits, looking down at Mari and Jowee when Jowee decides not to go with Pirate Beard's Treasure Hunt after all.

The Hidden Beach is seen briefly at the very start of the game, when Heather runs up to it after her nightmare and sees the treasure chest that had been washed up on the shore. When the treasure chest opens and she picks up a scepter, Wilfre is able to take control of her and make his return. 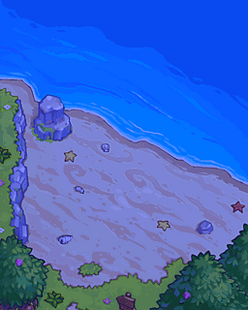 The Hidden Beach in Drawn to Life: The Next Chapter
Add a photo to this gallery
Retrieved from "https://drawntolife.fandom.com/wiki/Hidden_Beach?oldid=56019"
Community content is available under CC-BY-SA unless otherwise noted.