“The Council is great! They give us rules to make us safe.”

Hoaka, previously (but incorrectly) known as Noaka, is a Raposa in Drawn to Life: The Next Chapter. He resides in the west side of the Galactic Jungle near the space elevator and next to Kamalah.

He wears a green loin-cloth and a glass helmet like most residents of Galactic Jungle. 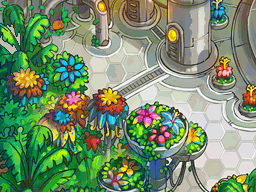 The area in which Noaka resides.
Add a photo to this gallery

Retrieved from "https://drawntolife.fandom.com/wiki/Hoaka?oldid=56021"
Community content is available under CC-BY-SA unless otherwise noted.