Drawn to Life Wiki
Register
Don't have an account?
Sign In
Advertisement
in: Article stubs, Enemies, Enemies in Drawn to Life: The Next Chapter,
and 4 more

They emerge from lava pools and shoot fireballs at The Hero.

Hose Dragons are long, red dragons. They are made up of trumpet-like head pieces along with several body pieces.

They have small spikes on the back of their bodies, and a tan front side. They wear a helmet of some sort. The helmet appears to be red and gold with wings on the sides. 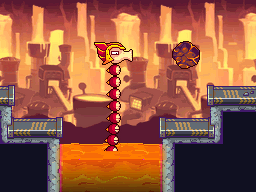 A Hose Dragon in a level.