Drawn to Life Wiki
Register
Don't have an account?
Sign In
Advertisement
in: Drawn to Life: The Next Chapter, Levels, Galactic Jungle,
and 3 more

Crater Pass
“Sorry, Hero. Could you go get that... whatever thing?”

Iron Arboretum is the second level in the Galactic Jungle in Drawn to Life: The Next Chapter.

After The Hero finds the accelerator in the Cosmic Bog, they restore color to the monitor so the villagers can hear the new law from The Council. Once the color is restored to the wall, the council announces that sneezing is "strictly forbidden". After The Great Council's message, Click thanks the gang for repairing the "inter-council monitor". He then goes on to explain that The Council is too important to reside with common citizens, and that a special elevator must be taken to the top of the fortress in order to meet them. He then states how much of a privilege it is to visit the top of the tower, for only he and the S.P.U.D. go up there. Jowee then asks what he and the S.P.U.D. are and what they do. Click then answers that the S.P.U.D. protect the D.O.T.R.O.T.P.O.T.U.S.F., and that he is just a lowly messenger. When they arrive at the elevator, Click states that the elevator has broken down, and that he can't take the gang to the council until it's repaired. Click then states that he could repair the elevator himself if he had a Photon Blaster. After stating that the only one is found in Iron Arboretum, The Hero is sent into the level. 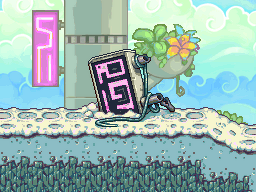 The start of this level.
Community content is available under CC-BY-SA unless otherwise noted.
Advertisement