Start a Wiki
“It's even more beautiful than I remembered! Thank you for restoring the color!”

Josephine is a Raposa in Drawn to Life: The Next Chapter. She resides in the west side of Watersong near the beachhouse at the village entrance. She owns a beach house near Faraway Beach which The Hero can restore the color to.

Josephine wears a red and gold dress and has her brown hair in a victorian bun. She appears to have the seemingly dominant orange Raposa fur. 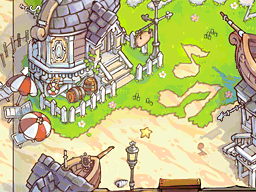 The area in which Josephine resides.
Add a photo to this gallery

Retrieved from "https://drawntolife.fandom.com/wiki/Josephine?oldid=55385"
Community content is available under CC-BY-SA unless otherwise noted.