Drawn to Life Wiki
Register
Don't have an account?
Sign In
in: Drawn to Life: The Next Chapter, Characters, Raposa,
and 3 more

“Thank you for bring back color”

Kaihe, previously (but incorrectly) known as Kaine, is a Raposa in Drawn to Life: The Next Chapter. He resides in the west side of Galactic Jungle under the large notifications screen.

He is first seen after The Hero restores Color to the ground. He questions The Hero's appearance and compares them to Click.

Following Galactic Jungle's tribal style, Kaihe wears nothing but a green loin cloth. He is an orange-furred Raposa with red, upward facing, face paint. He wears a large space helmet like many other residents of the village. 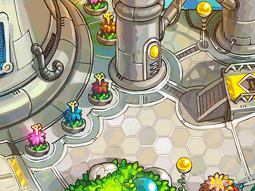 The area in which Kaihe resides.
Community content is available under CC-BY-SA unless otherwise noted.