“It'll take more than a few Bakis to stop a chief engineer such as myself.”

Key is a headstrong Raposa in Drawn to Life: The Next Chapter who is the chief engineer of Lavasteam and the creator of the Robosa. Later, Key assists The Hero in shutting down the Robosa.

Key is an adult, orange furred Raposa. He wears reflective blue goggles, a blue hat, and overalls with a white undershirt. He is often seen holding a wrench. His sprites also show him with a bit of facial hair.

Key is the chief engineer of Lavasteam and invents the Robosa to work side by side with the Raposa so they do not have to work as hard. After Miney proclaims himself king, he enslaves everyone, including the Robosa, to do his bidding for him and work even harder to mine banya crystals.

Key, along with some other mechanics, relocate to the Magma Flow Factory to look at a technical problem there. The Hero, Jowee, and Sock search Key out after being given a train pass to the next district by Moe. However, the color disappears while Key is in the factory. The Hero later finds Key examining some beat-up Robosa in the factory, commenting on how they were not able to withstand Miney’s torture.

After finding out Moe has made it safely out of the mines, Key goes to meet up with him to discuss how to “resolve this conundrum”. He explains to the Hero, Jowee, and Moe that he created the Robosa with a fail-safe, and that there is a switch near the Lava Flow Factory. However, it can only be accessed with a special key that Miney has hidden in the Clock Tower.

As they start to look for the key, Miney catches them and orders the Robosa to send them to the dungeon in the Clock Tower. Key warns Miney about the Robosa being not being able to withstand the overload of commands, but Miney does not trust him and sends them all into the Clock Tower, except for Jowee, who escapes to get help. Key is found fighting a Baki with his wrench, and is rescued by the Hero after they kill it. He later tells the Hero he could have taken it on himself.

After exiting the Clock Tower, Miney tries to get the Robosa to stop the newly freed prisoners, but due to overloading the Robosa with commands, they malfunction. Key formulates a new plan: the Hero will get the mold for a new key in the “(very dangerous) Clockwork Assembly” while Key finds the other materials. After making the key, Key asks the Hero to pull the switch, which turns off every Robosa, except for the Giant Robosa, a new Robosa still in its prototype phase invented by Key, which is outside of the control of the switch. Salem manages to sneak into the volcanic core and activates the Giant Robosa manually. It then starts to tear the Core apart. Key warns the Hero about the Giant Robosa, and tells the Hero how to destroy it if the Hero talks to him before the fight.

After the Giant Robosa is destroyed, Key comments on how he got carried away creating it and apologizes. He then tells the Hero that he will always be of service to them. 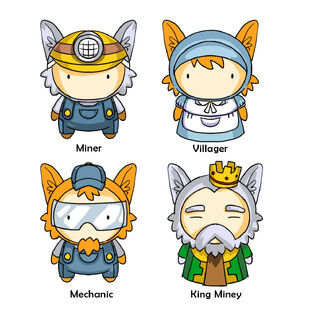 Concept art for Key (Mechanic) and other Lavasteam Raposa 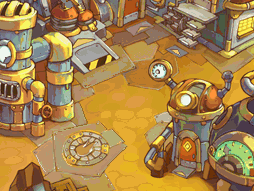 The area in which Key resides at the end of the story.
Add a photo to this gallery
Retrieved from "https://drawntolife.fandom.com/wiki/Key?oldid=60859"
Community content is available under CC-BY-SA unless otherwise noted.