“Hero can safely jump onto the Lavaberg. Standing to one side of the Lavaberg will cause that side to sink while the other side rises up out of the lava.”

Lavabergs are creations in Drawn to Life: The Next Chapter created in Lavasteam within the Volcanic Core level. Once created they act as floating platforms that allow the Hero to cross otherwise deadly lava. They're most similar to Ice Cube or Chandelier from the first game, but with more dynamic physics.

Due to the Lavaberg being a creation object, the appearance of this object is completely dependent on the player. 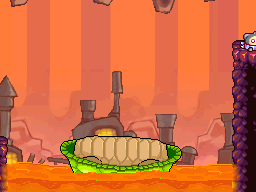 The Lavaberg's pre-drawn guide in a level.

Retrieved from "https://drawntolife.fandom.com/wiki/Lavaberg?oldid=47533"
Community content is available under CC-BY-SA unless otherwise noted.