Drawn to Life Wiki
Register
Don't have an account?
Sign In
in: Buildings, Drawn to Life: The Next Chapter, Village Area,
and 3 more

The Map Room is an important building on Turtle Rock in Drawn to Life: The Next Chapter. Acting as a world-selection screen, it shows the player all of the villages that have been visited, and the next village that needs its color restored.

The Hero can travel to other villages by selecting them on the map, on which they are shaped like pop-up books, the same as they are when actually visited. Every time The Hero completes a village (by finishing the storyline in the village; as coloring everything is optional, though certain parts of the village must be colored as part of the story), Heather's Pendant reveals the way to a new village, up until when they must venture to Wilfre's Wasteland.

The Map Room is a small, dome-shaped building on the far eastern side of Turtle Rock. It is composed of multiple metal plates, some varying in style and size, and like most buildings from the village, it has an orange gable roof jutting from some sections of the building.

Several ornaments may be seen mounted onto the roof and walls.

The interior of the building is large yet crowded due to the high volume of shelves, chests, and other miscellaneous objects. The floor is covered with green carpet except where it is divided by the eight spokes of the map pedestal in the center of the room and where the wood floor moves on to its second layer. Several maps may be seen along the walls and on shelves, each using a different map projection.

An observation deck with a telescope and a wood-burning furnace are easily visible within the structure, but are never used. 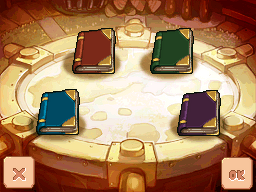 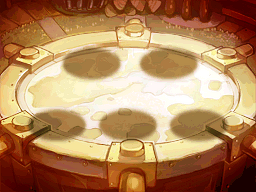 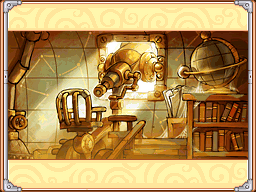 The sub-screen backdrop while using the "world map" pedestal. 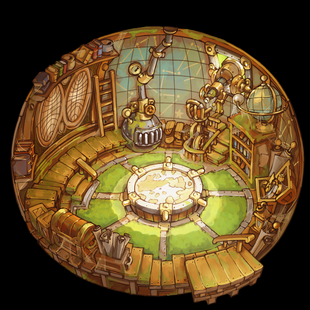 Hi-Def artwork of the Map Room's interior showing all of the detail by Edison Yan.
Community content is available under CC-BY-SA unless otherwise noted.