Start a Wiki
“It’s a diary written by previous mayors... before Creation Hall was sealed...”

Upon finding the book in Creation Hall.

The Mayor's Book is a book passed down successively by the Mayors of the Raposa Village. Each Mayor would write down the story of their life and what happened to the Village during it inside.

It is kept in the Creation Hall, where Mari finds it after the player travels to Icy Lake and just before she starts her training to become the next mayor of the Village. When the Shadow came and the Creation Hall was locked, nobody could get to the book, and the Mayor thought that he wouldn't get a chance to write down his story because of this. However, when The Creator sent The Hero, and the Village was restored and Creation Hall unlocked again, he changed his mind. 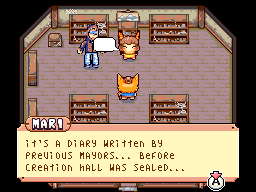 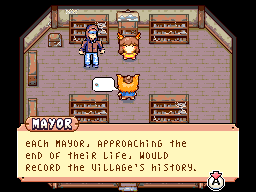 The Mayor explaining the purpose of the book to Mari.
Add a photo to this gallery
Retrieved from "https://drawntolife.fandom.com/wiki/Mayor%27s_Book?oldid=57439"
Community content is available under CC-BY-SA unless otherwise noted.