Mick is a Raposa in Drawn to Life: The Next Chapter. He resides in the west side of Lavasteam on the tracks near the Rocky Railroad station.

He is a Raposa with dark grey fur and a yellow hard hat with a light. He wears blue dungarees and a blue work shirt underneath. He wears brown gloves and brown shoes. 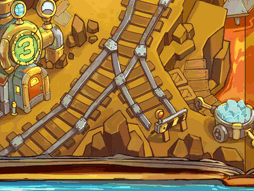 The area in which Mick resides.
Add a photo to this gallery
Retrieved from "https://drawntolife.fandom.com/wiki/Mick?oldid=58791"
Community content is available under CC-BY-SA unless otherwise noted.