“Why does everyone look so weird?”

Mike is a human that got trapped in the Raposa world.

Mike's personality isn't deeply looked into. It is explained that he is nice, according to what the Raposa have said. He is shown to have a lot of faith in people, seeing as he is the only character on Turtle Rock who didn't go straight to giving up when Wilfre threw Heather's Pendant away into the ocean. He is shown to be caring and capable of understanding different perspectives, as he did consider Wilfre's intentions in Drawn to Life: The Next Chapter to be decent.

Mike is a young human boy with spiky blonde hair. He wears a grey jacket, a white t-shirt, blue pants and sneakers. He has blue eyes.

Mike gets trapped in Rapo City with two Raposa children. They are soon saved by The Hero who takes him to the village. The Mayor allows him to stay, and he stays with Dr. Cure for the rest of the game.

Raposa often ask him what happened to his ears due to the fact that they are unaware that he is a human. Mike often replies back in a confused and indignant manner.

In the Drawn to Life: The Next Chapter (Wii), Mike becomes the technician of the village and is in charge of maintaining the Lighthouse.

During the first half of the game, Mike is away on unknown buisness. When the Hero and Jowee are exploring The Baldy Slopes, however, Mike returns to the village. Mari explains the things that have happened thus far, and tells him that Jowee and the Hero are searching for the Eternal Furnace. After this, Mike runs off into the Icy Wastes, and the Hero must rescue him.

When Jowee and the Hero find him using the Frozenini, he seems to be unaffected by the cold. He tells the two that he had a dream that he would find the Furnace if he sought it out. The three return to the village and Mike marks the location of the Furnace on their map.

After this, Mike will stand outside the lighthouse on the far left side of the village. He does not offer any sort of challenges for the player. He can be talked to and will typically make programming jokes or tell the Hero about how welcoming the Raposa were to him. He typically ends his talks with "You have no idea what I'm talking about, do you?"

At the end of the game, it is revealed that Mike was originally a normal boy living in Real Life with his sister Heather and his mother and father. One day they headed to the carnival and won dolls of Jowee and Mari. On their way home they crashed into a truck resulting in the debatable death of Mike's parents and Mike falling into a coma.

Heather prays to God to save Mike from his coma. He dreamed of The Raposa World which came into existence while he slept.

In the Drawn to Life: Collection and in later versions of Drawn to Life: The Next Chapter, the ending is modified due to a ratings complaint. Instead of getting in a car accident, Mike is hunting for fireflies with Heather during a camping trip. He climbs a tree in pursuit of one of the fireflies, and falls out of the tree, resulting in unconsciousness, after the branch he is standing on breaks. 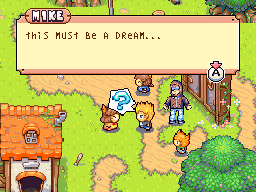 Mike after being brought back to the village and talking to Mari. 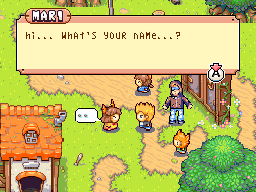 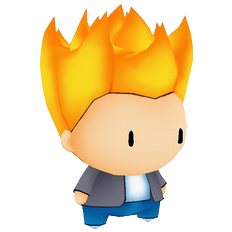 Mike as he appears in the Wii game.
Community content is available under CC-BY-SA unless otherwise noted.
Advertisement