Mini Goo is a creation in Drawn to Life. It is a small platform drawn in the Banya Fields level of the Snow Gate. It is essentially a smaller version of the Goo platform.

Just like the aforementioned Goo creation, The Hero will quickly sink and fall through the Mini Goo if they do not jump frequently to counter the sinking effect.

Due to the Mini Goo being a creation object and having no pre-drawn preset or guide, the appearance of this object is completely dependent on the player.

They are still confined to a 629px area. 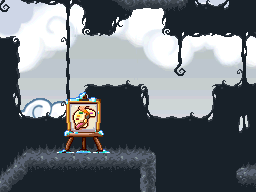 The area where this creation is drawn.
Add a photo to this gallery
Retrieved from "https://drawntolife.fandom.com/wiki/Mini_Goo?oldid=58039"
Community content is available under CC-BY-SA unless otherwise noted.