Drawn to Life Wiki
Register
Don't have an account?
Sign In
in: Non-Canon, Drawn to Life: The Next Chapter (Wii), Objects,
and 2 more

View source
“We have Wilfre's pen, pencil, AND his journal!”

The Pen and Pencil are items in Drawn to Life: The Next Chapter (Wii) that are found in Shadow City and used by Circi to create the Dark Mannequin. It is one of the Artifacts of Power.

The Pen is an inkwell pen that has a red body and a golden tip. The Pencil is a yellow pencil with presumably #2 lead.

The Pen and Pencil are first found after the Hero defeats the Boss in Wilfre's Lair. They were originally used by Wilfre to write in his journal before his death in Drawn to Life.

Eventually, the group come across Wilfre's Journal and read about his plan to assemble the Artifacts of Power to rival the Creator in terms of power. The group gathers the rest of the Artifacts and Circi double-crosses the Raposa, forming the Dark Mannequin. She tries to draw Wilfre's likeness onto the mannequin, but forgets what he looks like, accidentally forming the Giant Scribble Monster. During the fight, the Hero must ground pound the mannequin a total of 25 times.

Once the mannequin floats into the air as the Shadow fades from the village, it explodes, separating the Artifacts. The Creator then takes the artifacts and tosses them into the sea. 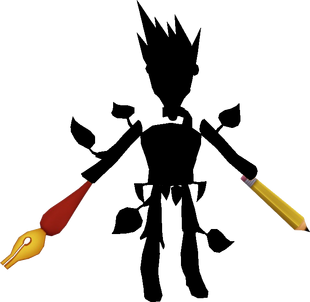 The Pen and Pencil as part of the Dark Mannequin.
Community content is available under CC-BY-SA unless otherwise noted.