Drawn to Life Wiki
Register
Don't have an account?
Sign In
Advertisement
in: Enemies, Drawn to Life, Snow Gate,
and 2 more

Pengoons are enemies found in Drawn to Life, found in some levels of the Snow Gate.

Pengoons are hostile enemies that attempt to chase The Hero by sliding in order to inflict damage. When a Pengoon notices The Hero, it will begin to slide toward them. When sliding, a shield of displaced snow will form in front of them; because of this, Pengoons can not be damaged by the Snowshooter while sliding. The Hero may inflict damage via jumping regardless of whether the enemy is sliding or not. A Pengoon will remain sliding for approximately one full second; then, it will stand back up. If the player is still within range, the Pengoon will again face The Hero and attempt to slide at them. Otherwise, the enemy will remain neutral until The Hero approaches again.

When not in pursuit of The Hero, Pengoons walk back and forth along whichever platform they are on. Unlike some enemies, such as Baki, Pengoons will not walk off ledges willingly. However, a Pengoon may inadvertently slide off a ledge in an attempt to reach The Hero.

Pengoons are blue with a white belly, and look similar to penguins. They wear a red and orange striped winter hat with a blue/white ball at the end of it. These creatures also wear a red bow-tie. 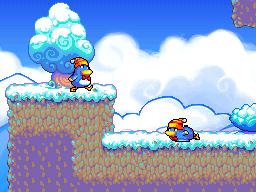 Two Pengoons in a level.
Community content is available under CC-BY-SA unless otherwise noted.
Advertisement