Pilot Birds are enemies that only appear in Faraway Beach.

Pilot Birds fly in a linear pattern in the sky, making avoidance for a lone Pilot Bird somewhat less challenging. Despite not deliberately pursuing The Hero or trying to cause harm to them, Pilot Birds' large bodies and their tendency to fly in groups make them a threat. The player may jump on a Pilot Bird to knock it out of the air, killing it.

Pilot Birds are fluffy white birds with large beaks. They have small wings toward the back of their bodies and two large feet dangling behind them. Pilot Birds wear large flight goggles that partially overlap with their beaks. They also appear to have a short tail. 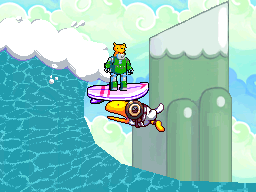 A Pilot Bird being knocked out of the sky by a Hero. 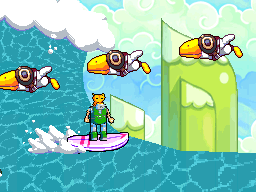 Three Pilot Birds flying above a Hero in a level.
Add a photo to this gallery
Retrieved from "https://drawntolife.fandom.com/wiki/Pilot_Bird?oldid=58482"
Community content is available under CC-BY-SA unless otherwise noted.