Drawn to Life Wiki
Register
Don't have an account?
Sign In
in: Raposa, Characters, Drawn to Life,
and 9 more

“Let's set sail for the closest port and plunder some Rapo Coins!”

He is rescued from the Conch Ruins. Originally, he and his two crew mates were regarded as a dangerous nuisance to the Raposa Village. The pirates threatened to attack the Raposa Village until The Mayor promised them that they could have the newly-found pirate ship if they didn't cause any trouble. Pirate Beard proves his honor and worth in Drawn to Life: The Next Chapter when he serves as the captain of Turtle Rock. Pirate Beard was originally not a villager of the Raposa Village; he was the captain of Raposa pirates as they went everywhere in their ship pirating everybody they could find.

Pirate Beard is an adult male grey furred Raposa. He wears a light brown pirate hat and a red bandana on his head. He appears to wear a yellow earring in each of his ears. He wears a yellow shirt along with a dark grey vest and matching pants.

When Pirate Beard is rescued, he returns to the village with his crew to begin plundering the Raposa. The Mayor promises them a ship if they don't attack anyone. The pirates agree and live in their new home. Later on Pirate Beard announces a treasure hunt around the world which the villagers can choose to come on. Indee decides to join the crew and Jowee is offered a chance but doesn't take it so he can stay in the village with Mari.

In the Wii version, Pirate Beard helps the player throughout the game, mainly while navigating Jangala Falls, Treetop Village, and Tundara.

Later in the game, Mari tells Jowee and the Hero to ask Pirate Beard about the Icy Wastes. He tells the two that the Wastes are dangerous and without something sharp, they'll never be able to make it through the area.

Throughout the game, certain Raposa will give the Hero certain challenges to complete. Pirate Beard offers the Hero what are essentially Time Trials for six specific levels. The specific challenges are show below:

In the DS sequel Pirate Beard is one of the few Raposa not to be kidnapped by the shadow portals. He attempts to save the villagers by taking them to his ship which is however been stolen. The Creator soon sendsTurtle Rock to collect the Raposa and take them on a voyage around the world to restore color and rescue the kidnapped Heather. Pirate Beard serves as a primary figure to the crew as he drives the ship to other islands. He sadly vanished with every other Raposa when Mike woke up from his coma. 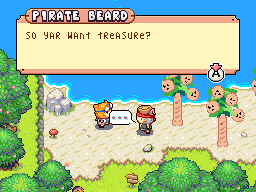 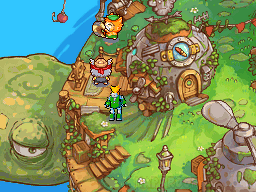 Pirate Beard working together with Crazy Barks while a Hero watches. 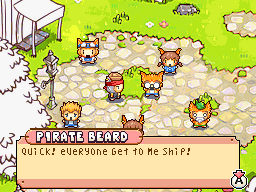 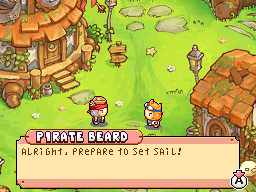 Pirate Beard gets ready to set course for another village. 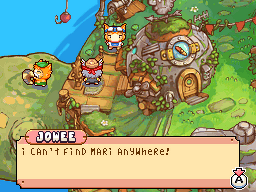 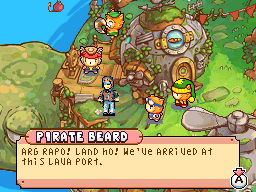 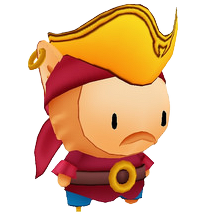 Pirate Beard as he appears in Drawn to Life: The Next Chapter (Wii).

Pirate Beard's talksprite in Drawn to Life: The Next Chapter (Wii).
Community content is available under CC-BY-SA unless otherwise noted.