Not to be confused with BakiBeard Coins.

“I'm sure you'll find something worth your Rapo Tokens...”

Rapo-Coins, sometimes called Rapo-Tokens, are the main currency in the Drawn to Life series.

They can be collected in all the levels throughout both games. They can also be earned through defeating enemies, and by stringing together combos.

In Drawn to Life, Rapo-Coins can be used to buy new patterns, stamps, colors, Music, Abilities and even a minigame at Isaac's Shop. They can also be thrown into the Wishing Well in order to receive certain rewards.

Similarly to the first game, in Drawn to Life: The Next Chapter they are used to buy Music, Hero guides, and upgrades for Weapons.

There are four types of coins (three in each game, with the one worth the highest amount differing between the first and second games):

10 red coins (worth 100) being awarded for completing the level with a perfect score. 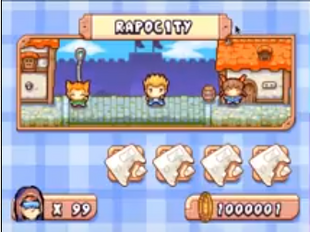 A player exceeding the maximum number of coins allowed by Drawn to Life by cheating.
Community content is available under CC-BY-SA unless otherwise noted.
Advertisement