Raposa Archer Statues are one of two types of Raposa Statue, enemies that reside in Watersong. They disguise themselves as the normal inanimate statues commonly found in Canal Royale and Jivin' Rooftops. They attack when the player comes near them.

Once The Hero comes within a certain distance of an Archer Statue, the statue will begin firing arrows in sets of three into the air. These arrows will then fall down onto The Hero. They cannot be defeated.

Raposa Statues are light greyish-brown statues that generally resemble Raposa (except that the statues, due to their size, are more detailed and taller than the sprites of all Raposa characters).

Raposa Archer Statues are modeled after male Raposa holding bows at full draw and appear to wear nothing besides loin-cloths and, presumably, a quiver on their backs. 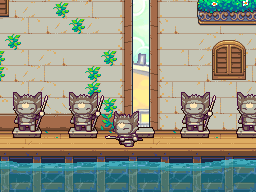 Raposa Statues in a level.

Add a photo to this gallery
Retrieved from "https://drawntolife.fandom.com/wiki/Raposa_Statue/Archer?oldid=56687"
Community content is available under CC-BY-SA unless otherwise noted.